Have y’all seen those “What they think I do vs what I actually do” memes?  Well, I thought I’d give my readers, and my friends who aren’t a part of the latin dance scene, a behind the scenes look at a weekend in the life of a traveling dance company.  Here’s a quick look at La Fuerza Dance Company’s recent trip to the 3rd Annual Upstate NY Latin Dance Festival.  Before I begin, I want to say thank you to Darin (the event organizer) and all those involved at the Essence of Rhythm Latin Dance Co. for having us take part in their awesome event! Also, a big shout-out to all the students who attended both our workshops, as wells as the dance community in the upstate area as a whole, for showing us so much love. Was a blast meeting y’all and hope to see you on the dance floor again soon!

*Btw, as this is an introduction to a dance festival weekend, I’ll be explaining certain terms that people who aren’t involved in the dance scene may not be aware of.  Just a little something to get you prepared for what you can expect, should you choose to join us one day! 🙂 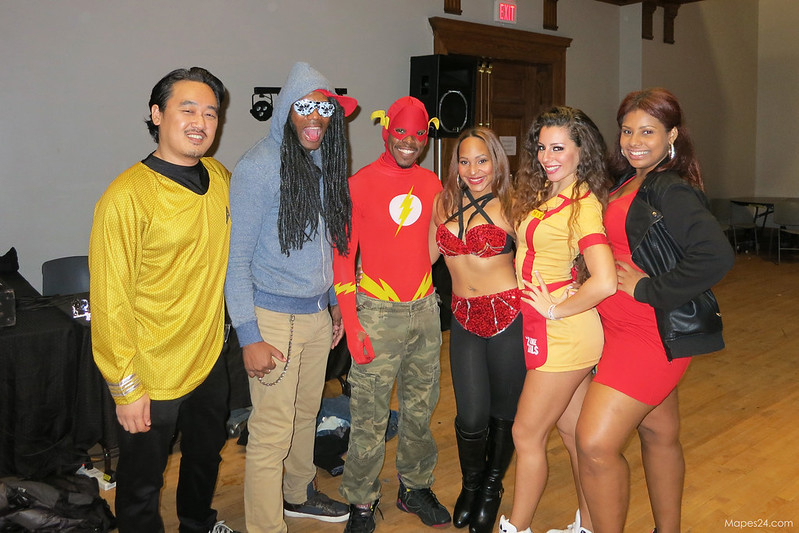 Here’s a pic of me and my lovely teammates (who somehow ended up color-coordinated) at the end of the first night.  Unfortunately, driving about 6.5 hrs up to Rochester after work meant half of us we were a bit too late for the costume party, but at least we got to show off our fancy attire!  And if you’re wondering, the answer is YES, Weezy is now a member of La Fuerza, haha! 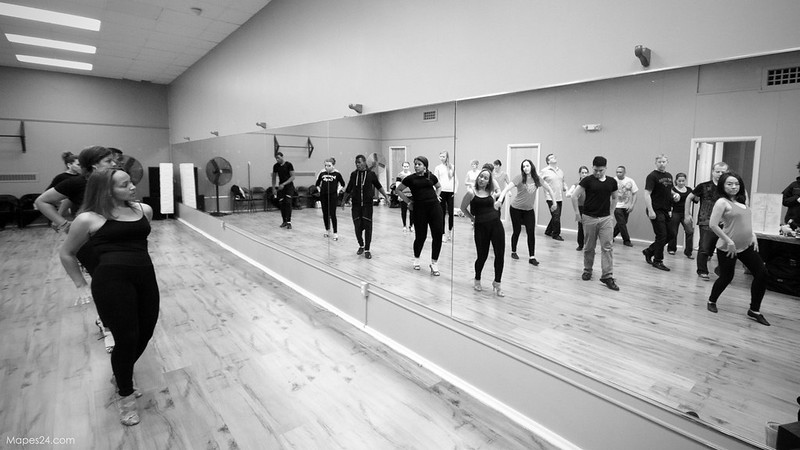 Teaching our first workshop of the day: Bachata shines.  For those unaware, shines are an intricate series of footwork and body styling that one synopates to the music while free from your partner.  Generally, Latin social dances (bachata, salsa, merengue, cha cha, tango etc) will require two individuals to connect in an open or closed position throughout the song.  But on occasion, when the music calls for it, you are able to split off from your partner to perform shines (somewhat like doing a solo freestyle dance). 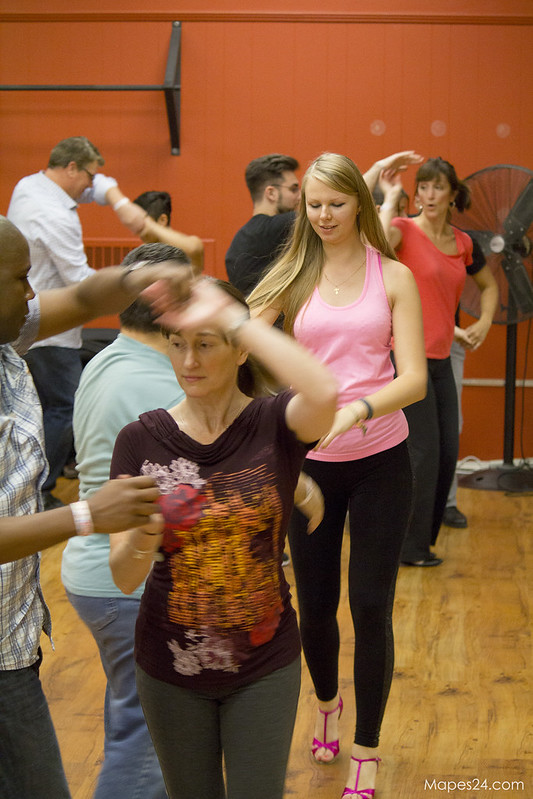 Here, you have the participants in our Bachata Partnerwork workshop, where they learn how to lead and follow various turn patterns.  These partnerwork patterns and shines are what the students are then encouraged to add to their repertoire for when they head out to social dance. 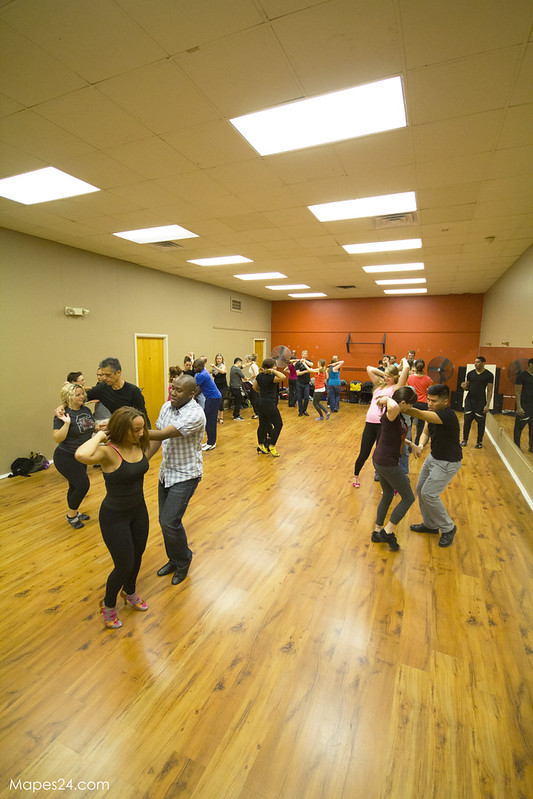 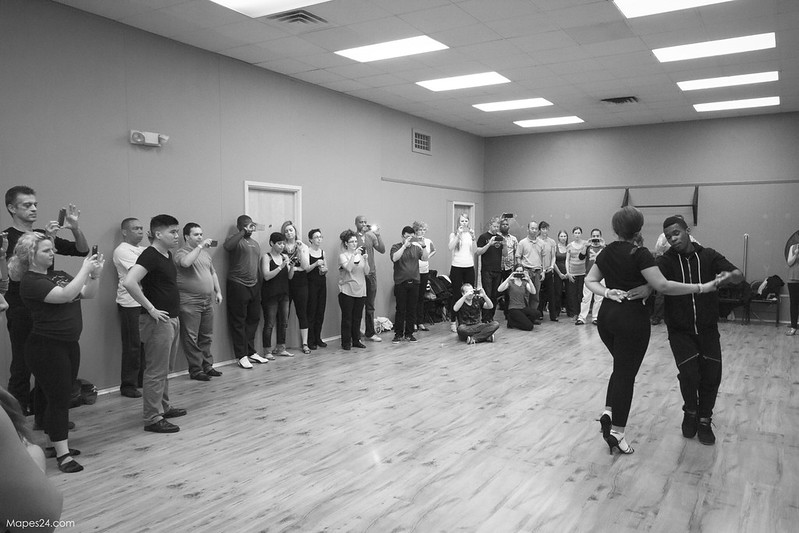 At the end of class, students are encouraged to record a demonstration of the materials that were taught during the workshop to use as a reference, should they choose to later rehearse the patterns on their own. 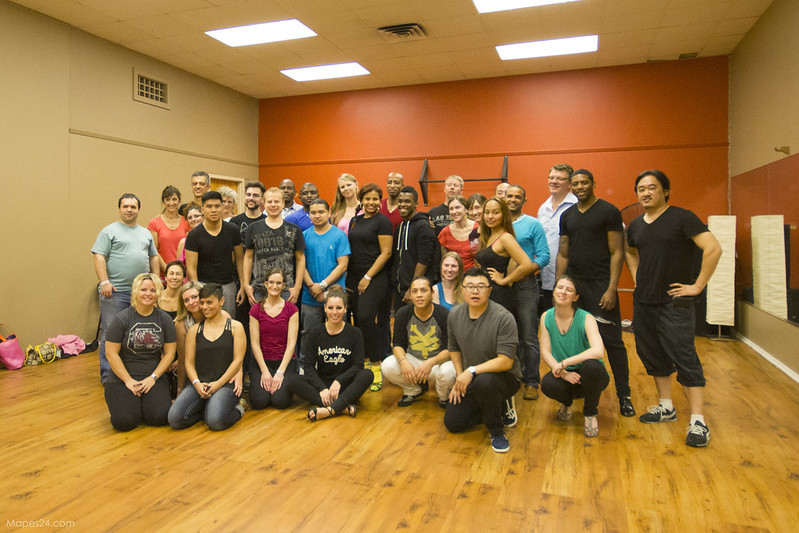 Thanks again to all who came out to participate in our workshops.  Hope y’all had a good time, and were able learn something new! 🙂 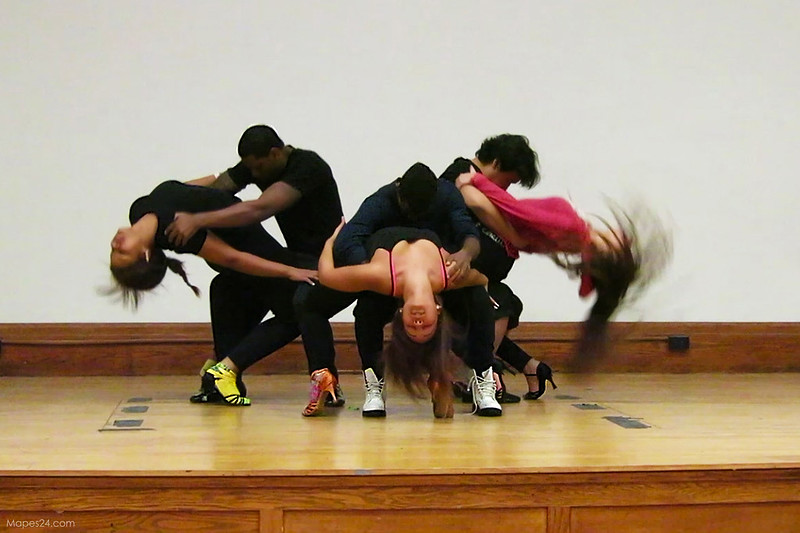 After workshops are over, there’s usually a quick break, then the performers for the evening will head out to run a tech rehearsal on-stage, where they do a full run-through of their routines.  This allows the dancers to check out the condition of the floor and mark out any final positional adjustments that need to be made. 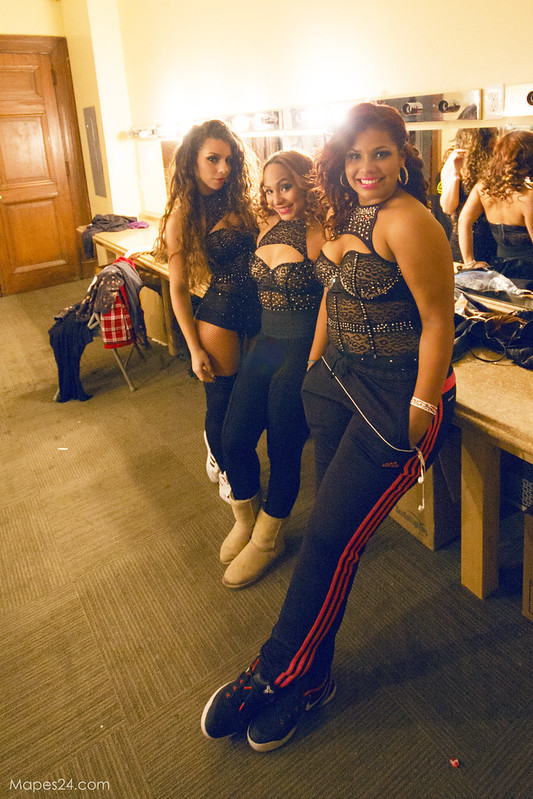 Backstage in the dressing room, preparing to get on stage. 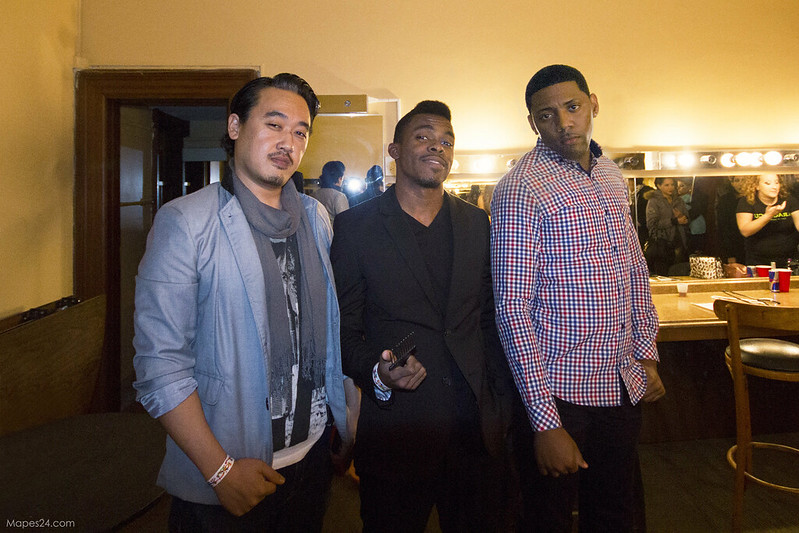 Soooo, why is it that the fellas are chilling backstage without their costumes on you ask? Well, fortunately for us, we generally don’t have the same prep time as the ladies for hair and makeup.  Also, since it takes us about 2 minutes to get into costume (yes ladies, I feel for your struggle, haha) we’re generally able to chill, and dance with the crowd for a bit before performances begin. 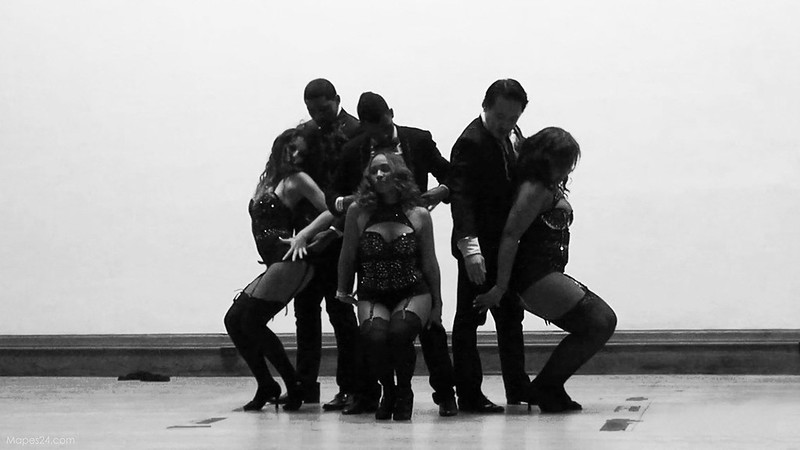 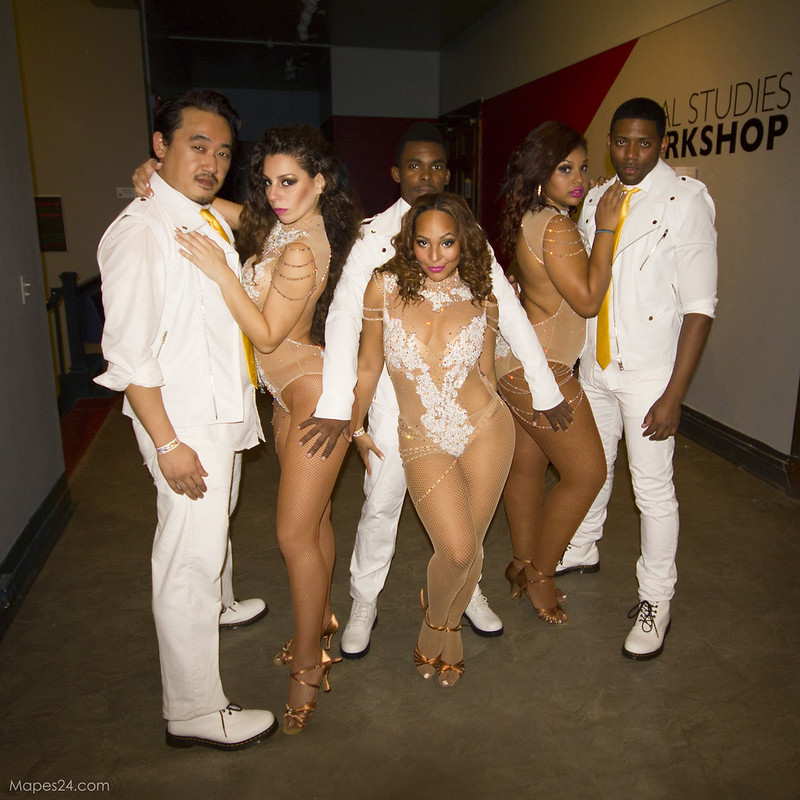 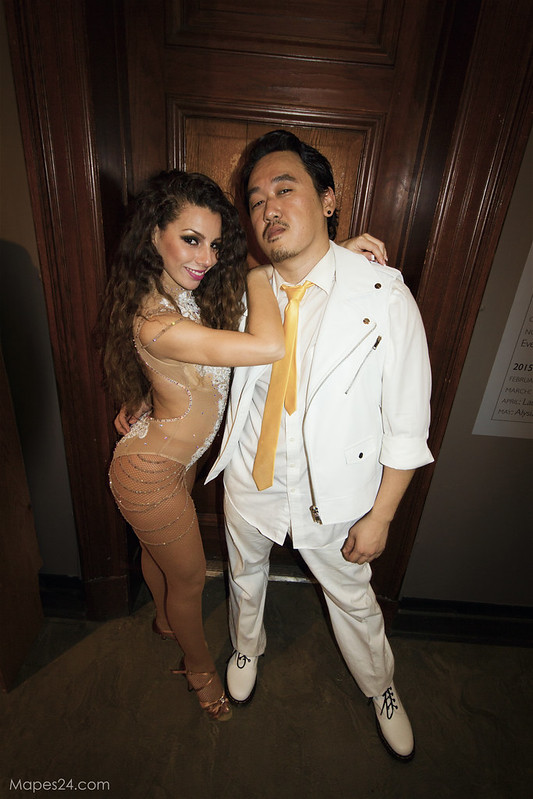 Also want to give a quick shout-out to Ivonne, the newest member of La Fuerza’s pro team.  She only had a few weeks to learn two new routines, but definitely put in the work to make it happen.  Kudos on two great performances, and glad to have debuted the white number with you! 🙂 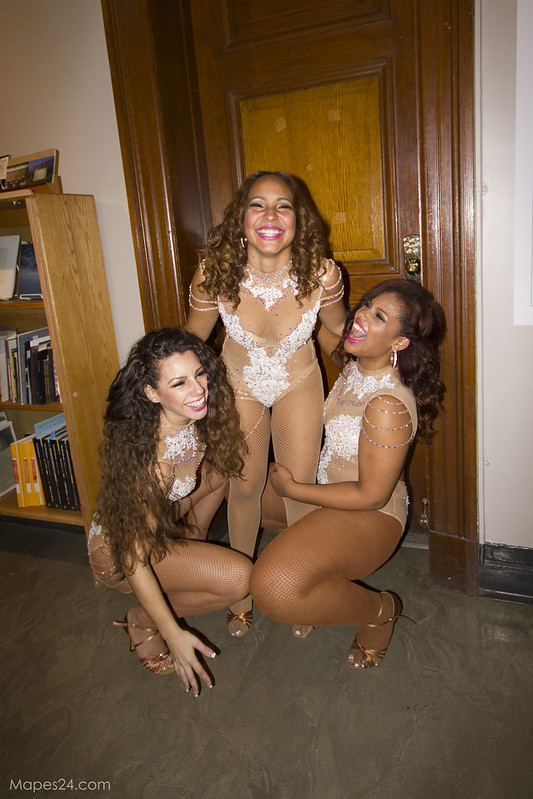 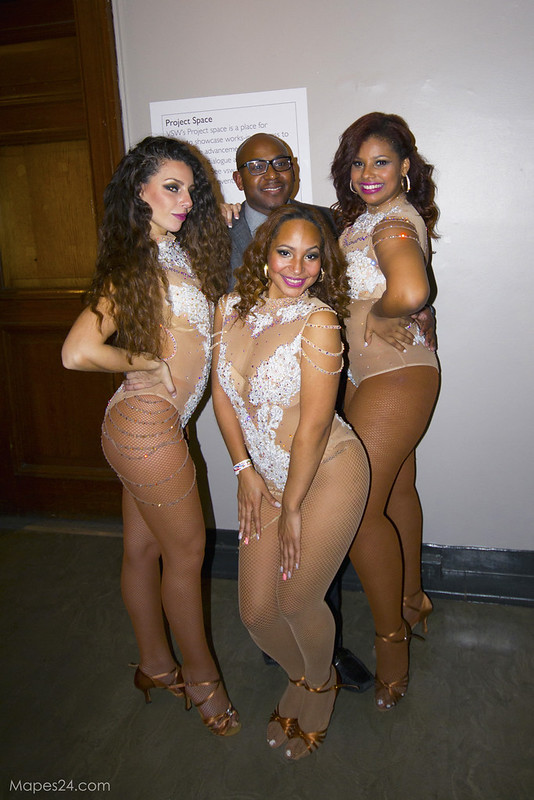 With Darin, the promoter/organizer of the weekend’s festivities. 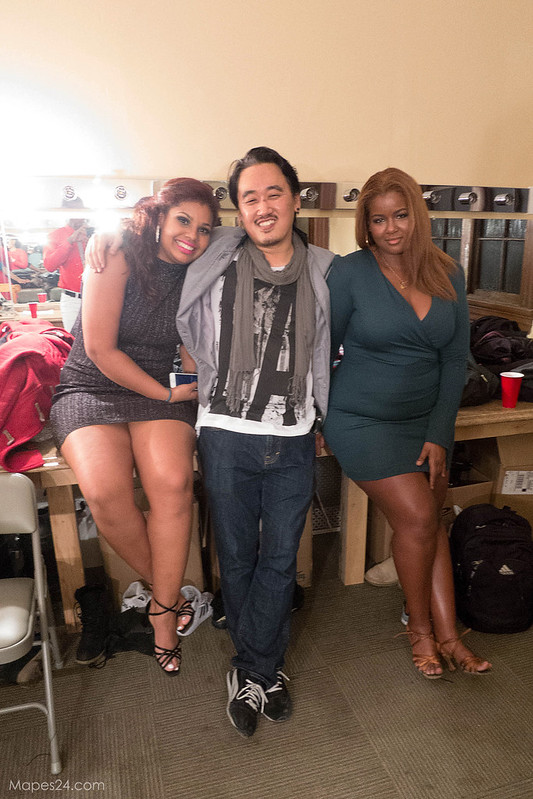 Chilling with one of my partners Amber, and Monica (our dancer/make-up artist extraordinaire) for a quick second backstage as we get ready to go social dance. 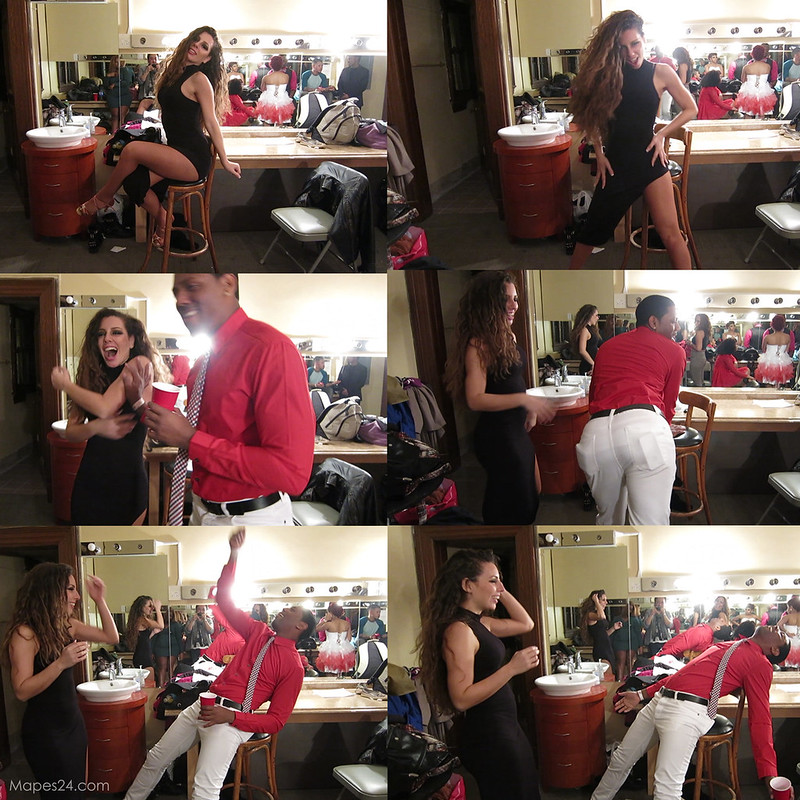 As you can see in the photos of the first-ever La Fuerza photoshoot pose-down, things can get pretty silly backstage.  The hard part is over and now there’s nothing left but to enjoy the rest of the night! 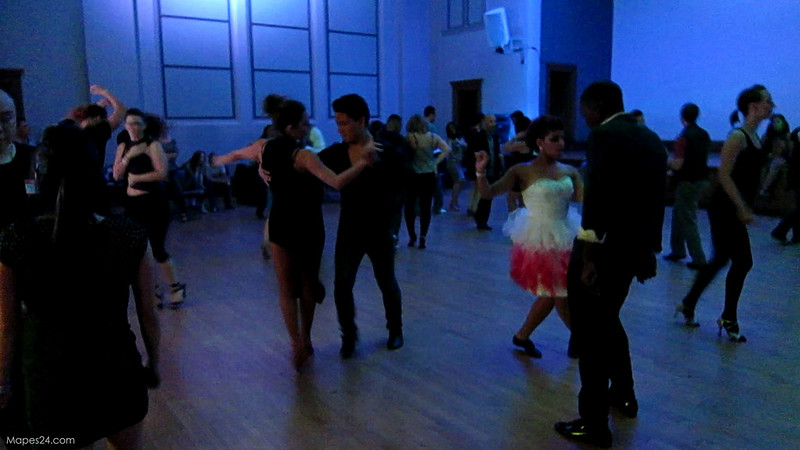 After we get all prettied up, the team will then return to the main dancing area, and social dance with the crowd until 2 or 4 in the morning (this changes depending on what city/country we’re performing in, due to variances in curfews). After it’s all over, the stomachs are generally a’ growling, and feet are pretty beat up, but it’s always worth the experience. *Btw festivals are generally smaller versions of congresses (where you may have a few thousand participants, and is spread out over a few days).  So you can image that if you multiply the above schedule by the 3-4 days at a congress, your body is generally screaming at you for some R&R by the time it’s over. But again, definitely worth it, and I wouldn’t have it any other way! 🙂

Well, I hope you were able to get a little better insight into this part of my life, and what it’s like to attend a Latin dance festival… and more importantly, are willing to check one out in person!  If you have any questions, please feel free to let me know. 🙂

Our performance videos for the event: