Over the past 10 years in New York, I’ve had the opportunity to take part in some very cool, entertaining experiences.  Sitting front row, center, at the Broadway show “In the Heights”, being in the audience for a taping of David Letterman, being present at Yankee Stadium for Mariano Rivera’s last game, and seeing some of the legends of Salsa and Bachata play live in local clubs.  But a few weeks ago, I took part in an entertainment experience that caught me completely off-guard.

An old friend of mine from L.A. had come to NY to visit his sister, and asked if I wanted to check out the theatrical production ‘Sleep No More‘, which was playing down at 530 West 27th Street, in Chelsea.  I remembered having read an article on the production, but only vaguely recalled that it had something to do with Macbeth.  Thank God for my limited memory, as going into the production with the least amount of spoilers only made the production that much more entertaining .  I will say that it is loosely based on the Bards’ tale of Macbeth, but is not a literal translation.  In an attempt to avoid any type of real spoilers, instead of providing a standard review, I’ll provide my top 3 hints on how to enhance your overall experience.

#1: DO A QUICK REVIEW OF MACBETH

Although not mandatory, it’s beneficial to do a quick review before attending the show.  This gives you a reminder on which characters are in the original play, and will help guide you regarding which characters you may want to follow.  Here’s a video that does a great quick review. 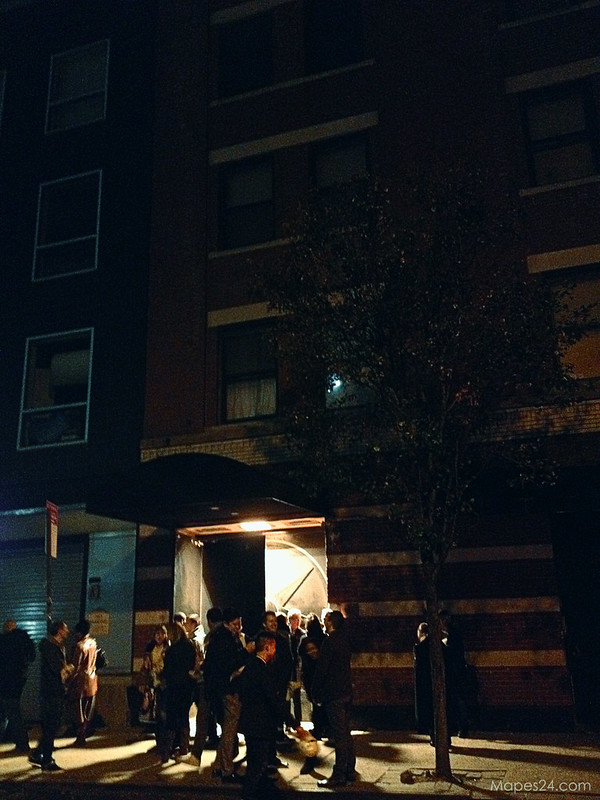 Outside the McKittrick Hotel

It is imperative that you stay on your toes as there are no seats in this production, and the actors seem to literally take you to every corner of the McKittrick hotel (which covers over 100,000 square feet and contains almost 100 rooms). So skip the large meal prior to the show, and grab a bite afterwards, as the last thing you’ll want is to lose the character you’ve been following due to stomach cramps.  No joke, at one point, I found myself in a dead sprint, running down a long hallway, and ascending three flights of stairs, just to keep up with one of the sprites in the cast. Also, make sure to bounce around between different characters as this will only help to flesh out the overall story. 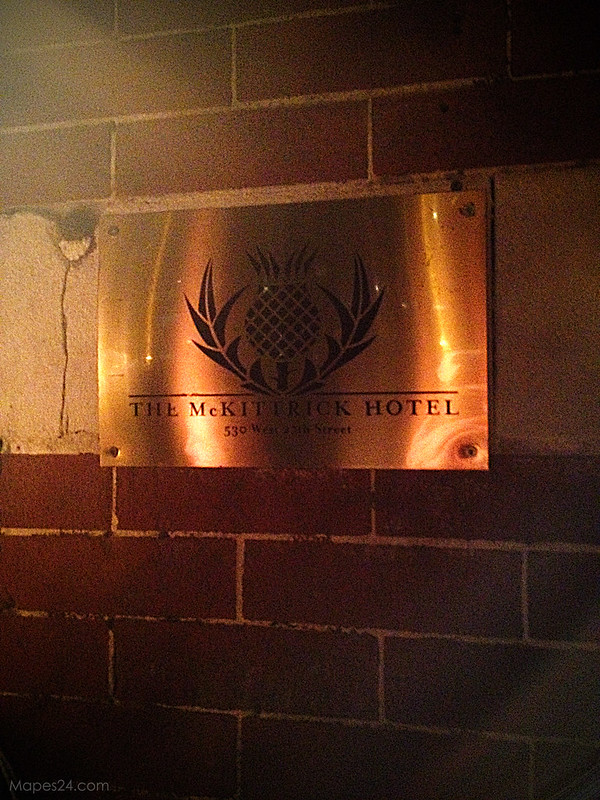 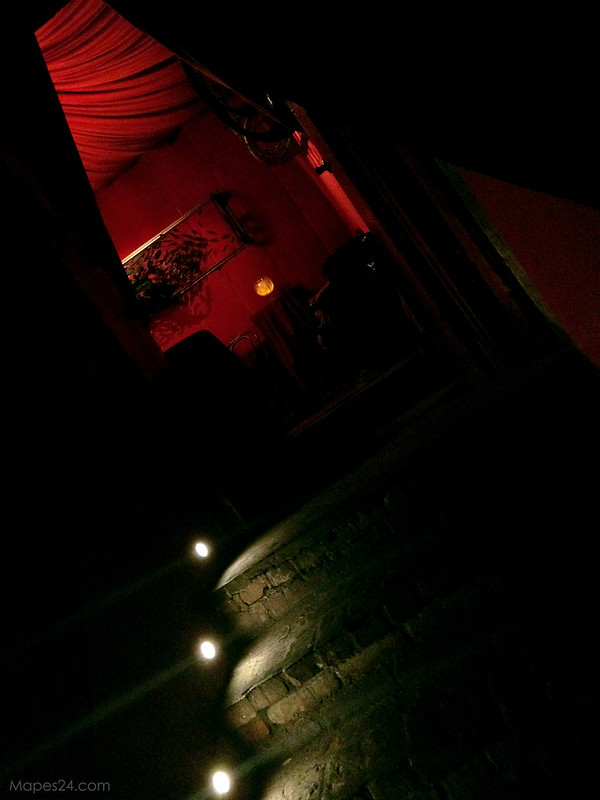 Every inch of the McKittrick Hotel has been masterfully transformed, and the lighting sets such a mood that you feel immediately transported back to a bygone era.  As you can see in the picture above, there is a creepy element to the production, that immediately puts you on alert, and makes you realize that you are not just watching a show, but are an active participant (and that pic is just a room in the lobby).  You are encouraged to interact with all the items that are placed throughout the hotel, as they help serve to flesh out the overall story.

As a quick example (*I guess the following could be considered a semi-spoiler, but doesn’t really give away anything major to the plotline), at one point a gentleman that I’d been following turns into a room, crouches behind a small cabinet, then proceed to run out of the room.  The crowd that had been following him quickly proceeds to leave along with the character, but a couple in front of me notices that the actor had dropped a lockpick on the floor.  As we three were the only ones to notice, we proceed to go to the cabinet and the couple then quickly attempts to open the cabinet.  As they were having no success, they handed me the pick, and after a few attempts, I was able open the door.  Inside were two little boxes which contained almost a hundred pieces of paper with the name Macbeth and Lady Macbeth written on each piece… all of which were also crossed out.  As I dug my arm further into the box, I felt and slowly withdrew what turned out to be a large metal hammer. All three of us present had an immediate “oooooooooooooo” moment, as the character’s murderous intent became tangible. It is this type of attention to detail, and incredibly creative use of props and setpieces, that draws you into the story of each character, and makes Sleep No More truly stand out from any other show I’ve ever experienced. 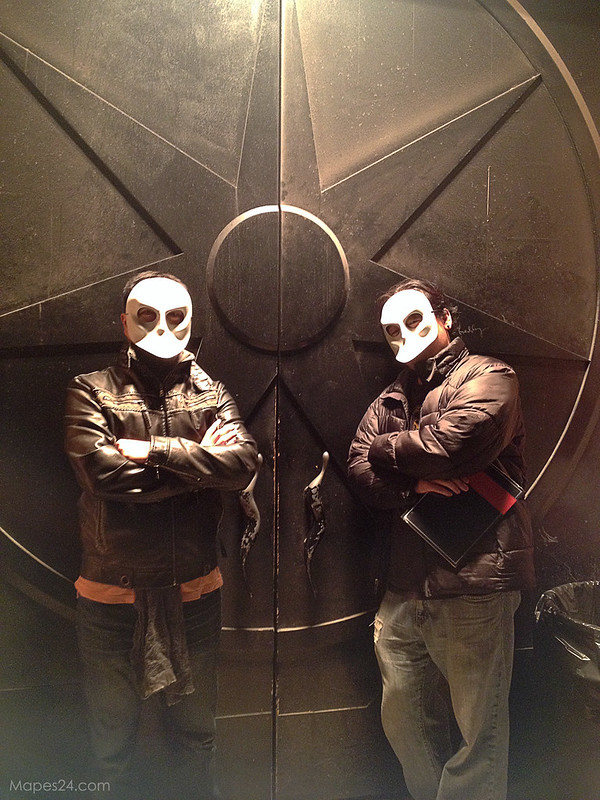 Here my friend Abe & I are rockin’ the masks that all audience members are provided prior to the show.  It definitely adds to the creepy factor, but also releases any inhibitions you may have about how you go about with your experience, as you remain anonymous the entire time.

I cannot repeat enough times how amazing and entertaining this experience was for me.  Never have I ever been a part of something that so comprehensively transported me into a different world.  Kudos to the director, all the actors, and to all the people behind the scenes, who made one of my most memorable experiences while living in New York possible. Sleep No More easily earns the Mapes24 ‘5 Star’ Award for excellence!